LASC is very happy to join the Irish Global Solidarity In 100 Objects Project in collaboration with developmenteducation.ie and the Irish Development Education Association.

What is the project?

This call invites individuals, groups and organisations to be part of building a digital storytelling project involving the Development Education community directly and people involved in Global Citizenship Education projects.

Part archival and part heritage project, this seeks to uncover the many stories, experiences and campaigns expressed through personal collections of objects, visual arts and artefacts (posters, documents, keep-sakes etc.) that bring these histories to life.

How are we joining? 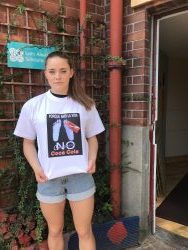 We remain strong in solidarity with the people of Latin America who have been affected by the Coca Cola corporation’s inhumane treatment. We stand with the people of Colombia and Guatemala who have been targeted by a concerted campaign of violence, kidnappings, murder. The children of El Salvador who have been put to work in dangerous and exhausting sugarcane harvesting. Mexico, where Coca Cola has been accused of building a monopoly, avoiding taxes, and using its political and economic clout to buy up vital water concessions for bottling and dumping, many of which lie within indigenous areas.

LASC has been an active source of support during these disputes. LASC has served as a platform for two members of SINALTRAINAL, to express their views without fear of repression. As well as have campaigned extensively to boycott Coca Cola products, reaching several important successes and alliances including the support of well-known bars in Belfast and Derry, SIPTU, and the Student Unions of Trinity College and UCD.

Link to the project:

🚨JOB OPPORTUNITY🚨
We are looking for a bilingual copywriter, (Spanish and Portuguese) .
If you want to apply, please, send your CV to coordinator@lasc.ie.
FIND OUT MORE 👉https://lasc.ie/open-call-copywriter/

We use cookies to ensure that we give the best user experience on our website. If you continue use of this site we assume that you agree.I agreeCookie policy