LASC > Blog > Blog: After the Quake

Blog: After the Quake

The political aftershocks that have persisted in the wake of September’s devastating earthquake in Central Mexico could make all the difference in next year’s elections. Photo by ProtoplasmaKid | Wikimedia Commons.

For the 21 million capitalinos living in Greater Mexico City, earthquakes are nothing new. In fact, when a devastating temblor rocked the city one month ago, people all over the country had just finished their annual, state-mandated evacuation drills – a relic of the massive, 8.0 earthquake that claimed the lives of 10,000 people and flattened much of the city 32 years ago to the day.

The fact then that this most recent quake, only one tenth of the power of the 1985 disaster, could have killed 370 people after years of preparation has caused widespread outrage throughout the country. Now, one month after the quake, the full effects of the Central Mexican earthquake are proving to be just as much political as humanitarian. 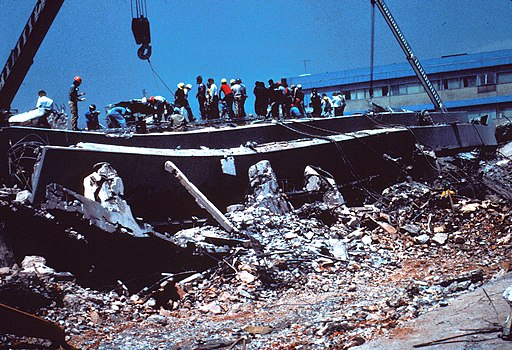 The 1985 earthquake caused the collapse of 412 buildings, like this General Hospital while severely damaging over 3,000 more.

The images and stories that flooded out of Mexico City in the days and weeks after the earthquake were at once startling and deeply familiar. Crumbled buildings, collapsed infrastructure, the haphazard response of the Mexican state – all these were elements that defined the lingering damage of the 1985 earthquake, only to be repeated again in 2017.

Then, as now, it was grassroots, community organisation that led the rescue and relief effort. Bands of volunteers, known within Mexico as topos (moles), tunnelled through the ruins of collapsed buildings in search of survivors, while entire neighbourhoods sifted through the rubble outside.

The Mexican state, in contrast, seemed to focus only on high-profile, widely-publicised incidents. In 1985, it was the collapsed maternity ward of Juárez Hospital. In 2017, it was the Rébsamen primary school, and the search for a missing girl, who, it later emerged, never actually existed at all. Meanwhile, real survivors in towns throughout the neighbouring state of Puebla have reportedly received no government aid whatsoever.

What is even more shocking than the people who have been left behind however, are those who have been deliberately skipped over. As Mexico enters its crucial 2018 electoral cycle, how aid is distributed, and who is seen to be doing it, has become a hotly-contested campaign tactic.

In both the Central Mexico earthquake and the earlier quake off the coast of the southern state of Chiapas, worrying reports have emerged of party operatives distributing aid in exchange for party membership, or even refusing to provide aid to non-party members. In a widely-circulated video from the nearby state of Morelos, federal agents can be seen diverting aid trucks from their intended destinations, instead stockpiling supplies to be redistributed later under their own banner. Local townspeople, who organised over social media, later appropriated the supplies and distributed them themselves.

Community relief groups, who risk underscoring the ineffectiveness of the government’s response and showcasing the power of bottom-up organisation, are therefore a huge political liability. In some cases, the military has even intervened to cordon off disaster sites and kick out volunteers, without providing any further information.

Yet their actions are not without precedent. In the 1980s, community relief groups coalesced into a powerful protest movement, eventually casting out the seemingly-invincible Institutional Revolutionary Party (PRI) from the city’s government, and ushering in a new government under the PRD – a centre-left splinter party. Mexico City became a bastion of progressive politics in a country that can often seem to be ruled by Catholic conservatism – passing same-sex marriage, decriminalising abortion and liberalising divorce laws.

Now, after two decades of uninterrupted PRD rule, Mexico City and the entire Mexican political system are due for another seismic upheaval. In 2018’s presidential elections, the ruling PRI will once again face off against its traditional rivals in the PRD and the right-wing PAN (both of whom are in talks to form an opposition coalition). Entering into the fray, however, and capitalising on the growing discontent throughout the country, is the burgeoning grassroots campaign of former Mexico City mayor Andrés Manuel Lopez Obrador of the newly-founded left-wing MORENA party, whose political persona and mass-mobilisation often draw comparisons to the likes of Bernie Sanders and Jeremy Corbyn.

Whatever the result of next year’s elections, they will surely serve as an indictment of the pervasive corruption of Mexican politics, whose fault lines have once again been laid bare by this recent quake.

Enrique Peña Nieto, Mexico’s infinitely unpopular president, was jeered by angry crowds when visiting earthquake-stricken regions, and told to “grab a shovel” and help. The irony that the state security forces, who have become heavily-militarised tools of repression during the War on Drugs, should try to recast themselves as humanitarians has not been lost on many citizens. Perhaps most damning, and most indicative of the pervasiveness of corruption in Mexico, is the fact that some 6,000 complaints over the past five years from citizens concerned about building code violations may have been ignored entirely.

While the earthquake last month was a natural disaster, it was also an intensely political one – it was not just one figure or one party at fault, but the entire political system that failed. Once again, a familiar refrain is being repeated throughout Mexico, in graffiti adorning collapsed homes, on Twitter, spoken on the streets of Mexico City, directing the anger of its citizens – fue el estado – “it was the state”.

Blog: Out of the Fields and into the Streets

An initiative for the development of education, campaigning for solidarity and cultural action.🌎📚✊

"The resulting movement, PetroCaribe Challenge, with its accompanying blockades & marches, is now the latest moment in an unfolding sequence of resistance against both neoliberalism & an emerging authoritarianism."

Um, the people of Puerto Rico are carrying a guillotine to the Governor’s mansion right now.